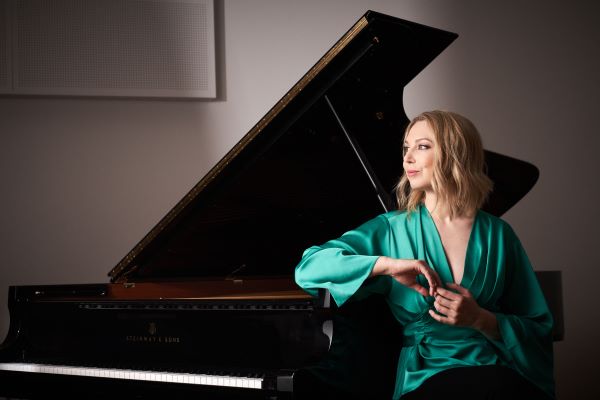 In June 2020, the German pianist Lydia Maria Bader released her new CD Chinese Dreams. An interesting concept, which was made possible using crowdfunding. MUSEDU spoke to the “German Piano Princess” (Chinese press) about her projects.

The Chinese love to award titles and beautiful red certificates. They were incredibly happy that I came to this remote area. Great artists don’t usually go there. I played several concerts there, and that was a highlight for the region. There was even a competition for children – the winners could then play during my intermission. The concept of a piano recital is not well known outside of big cities in China. Until a few years ago, it was not common to have an intermission during a concert, and there was no buffet. When the musician takes a break, the audience will go home. I said on my first tour in 2009 that I would really need to take a break in-between. The South of China is really hot in the summer, it was around 40 degrees. So the organizers needed to find a good way to fill this break. This is why local children had the opportunity to play and I also gave them a small master class. In China, such things often turn into huge events. As a gesture of appreciation, I was awarded the title “cultural ambassador”.

Your CD Chinese Dreams is meant to be a bridge between cultures. In addition to Chinese music, you have also recorded pieces by Western composers that have been influenced by China. Can you tell us more about this concept?

I am really fascinated by China. In the evening, you go to a night market and there are so many impressions, sounds and smells. After a really impressive tour in 2017, I wanted to share this atmosphere with others. I always take a lot of photos and videos when I am in China, but as a musician, my medium is music, of course. So I got the idea to turn this into a concert program. Most existing albums with Chinese music have been recorded by Chinese pianists. As a German, I cannot do it in the same way. So I did some research and came across Walter Niemann’s Old China Suite. In the foreword, he writes: “Believe me if I, a German, dream of going to China with you.” I thought: that’s exactly it. Let me take you by the hand and we dream of going to China together. None of the Western composers I recorded on my CD have ever been to China. This is where their imagination meets the actual China.

How close is this musical imagination to the actual China?

The pieces really capture the local atmosphere beautifully, for example “Rush Hour in Hong Kong” by Abram Chasins is true to life. But I have to say that Chinese art music is already no longer “original”, but the composers have been heavily influenced by Western music. Already at the end of the 19th century, classical music was very important to professional Chinese musicians. There were conservatories and the famous teachers were either Western foreigners or Chinese who had studied abroad. Shanghai was a center for immigrants. There were many Russians who had fled the Russian Revolution. The standard was high, art music had arrived in China, but at the time, it was only for the upper class. In order to make art music more accessible to the general public, composers were encouraged to incorporate Chinese elements.

And then came the Cultural Revolution in the 1960s …

Yes. As a Western instrument, the piano was banned during the strict phase of the Cultural Revolution. Later, it was permitted again on the condition that only piano pieces were composed which referred to the national musical identity. That was the time when Madame Mao commissioned the Yellow River Concerto. It took a while until Chinese composers were allowed to compose freely again. Many of them traveled across the country to collect folk songs as there is a rather limited number of national songs. I keep coming across pieces that are based on the same few melodies.

How do you experience the concert atmosphere in China?

It really depends on where you play. At my first concert, people in the audience were holding glow sticks. The background noise was incredible and didn’t get any quieter when I started playing. I was the first European pianist ever to perform in that region. Obviously, in a situation like that, the focus is not on the subtleties of any Beethoven sonatas. However, that has changed a lot over the years. Nowadays, the audience is being instructed how to behave during a concert. For example, that you shouldn’t eat or talk. Or that it is polite to clap, as the Chinese don’t usually follow this habit. As a performer, you can be happy if you have reached the end of the stage before the applause stops.

When I play in cities like Shanghai, there is no difference to Europe. You could hear a pin drop. I think it’s nice that the Chinese like to take their children to concerts. Once, I did a big tour as a summer program especially for children. I think we need to be more tolerant in other countries. Things could be a little more relaxed over here, too. We lock classical music in an ivory tower, but that is not what it was composed for. At the time when classical music was composed, there was no distinction between entertainment music and serious music. And all the fuss that people make about not clapping during movements. If the audience gets all excited about a rousing first movement and starts clapping – what’s the big deal?

How do you discover Chinese composers, and where do you buy your sheet music?

At the beginning, it was really hard. My Chinese agency provided the sheet music, and if I lost it, that was a disaster. During my first tour, the sheet music for my encore was stolen – luckily, that happened at my last concert! It was difficult to locate this particular sheet music again on the internet. When I was doing research for my current CD, it was difficult, too. I bought a famous music score in China, which was my basis for getting to know the composers. The rest of the sheet music could be found on the internet. Lately, it has been getting easier. There is a great edition on a hundred years of Chinese piano music, in ten volumes. These pieces are not just based on folk songs, but there is one volume on operas and ballets, one on suites and variations and there is also more modern music. Strangely enough, my Chinese colleagues over here can hardly help me with this subject. They seem more interested in the German core repertoire.

What is the level of difficulty? Are there any pieces that are suitable for amateur pianists?

Absolutely. For example, any ambitious amateur can play the “Kangding Love Song” on my CD. There are different levels. Obtaining the sheet music is the biggest obstacle, because it is not yet so easy to buy at our local music shops. I can recommend the “30 Famous Pieces of Chinese Piano Music”, edited by Wei Tingge, which is available both as a Google e-book and as a Kindle edition.

What are your current projects – are you already planning your next Chinese CD?

I have a lot of CD concepts in mind. These will also include Chinese music, but integrated into a larger theme. I really enjoy playing the Chinese Dreams, but during COVID times, it has become even more difficult to attract an audience with such an unusual program.

My Virtual Piano Academy started in September. These are virtual master classes for young pianists and more advanced amateurs. The first topic was “Boost your practice”. It was all about clever practice strategies: How can I structure my practice time and take my practice to another level, so that I can reach my goals faster and more efficiently? That’s the foundation of everything else. The online workshops and master classes take place together in the group, and the participants each have one hour of private lessons with me. There is also a Facebook group for further networking. And we have a guest lecture on EFT, a tapping acupressure which can dissolve blockages. This can help us overcome stage fright.

You can listen to sample pieces from Lydia Maria Bader’s CD “Chinese Dreams” on her website. She also shares photo albums with impressions from her concert trips to China.