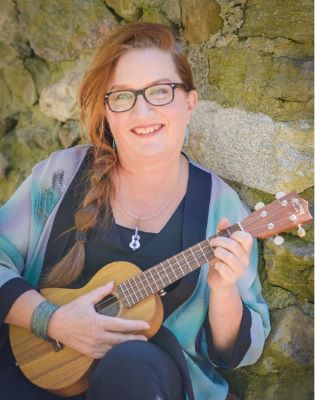 Lisa McCormick is an American singer/songwriter, known as a music instructor and Ukulele Guru. MUSEDU spoke to Lisa about her teaching philosophy.

You are trained in Gateless – a methodology based on ancient zen and brain science that is mostly used in creative writing, but not limited to that. Tell us more about this methodology.

Gateless grew out of studies that the founder Suzanne Kingsbury did on on how we respond in our minds and souls to things we perceive as negative and attacking as opposed to positive and encouraging growth. That is actually physiological and not just how you took something.

Suzanne ran Gateless writing salons in the area where I live. She would start with some relaxation and then offer a writing prompt – read us a poem or let us envision a scene. After twenty minutes, we would come back and voluntarily read out loud what we had written. There were specific rules how we were to respond to people’s writing. We were to pay attention to what we loved. That could be a particular string of words or an overall sensation of what a scene was like. It was always referenced to what exactly the writer had written. We protected their anonymity by never assuming that anything was autobiographical.

The only thing the writer would get in terms of feedback was a sense of how he or she had touched people. That’s Gateless in practice. Working with what is positive. Not candy coating things, but straight up “I loved that”. It wasn’t anything about craft in the sense that, “if you wanted to publish that essay, you should…” So it wasn’t like a critique group. What people might take away was, “people really resonated with how I used dialogue”. It shows what people love about your writing and you can learn from that.

How do you use the Gateless methodology in your music teaching?

I was trained as a Gateless teacher and found it creeping into my music teaching. I was working mostly with adult beginners who are not aspiring to become performers. They were doing it for personal reasons, so there was no need for the critique that a more professional-track musician might need to get from a teacher. When they were playing, it was very similar to people opening up in a writing salon. They would be nervous or they would say: “I played it better at home”. I would listen with a ton of appreciation for the fact that they are doing this act of courage and they are giving me that gift of becoming vulnerable. So I really honor holding that space and making it safe for them.

The student would say: “I made nine mistakes!”, but I would say: “That first line felt beautiful to me as a listener. I loved where you handled this turnaround we had been working on. I could see that the work you have been doing has been adding up…”. I would find all the things I appreciated. Of course, when it comes to music, we want to get better at the technicalities, so it is also about figuring out what the problems are and how to work on them.

So that’s where your musical philosophy “Note2Self” comes in…

Exactly. I always start with asking the student: “What bugged you?” I invite them to investigate their own performance through their memory. This is the basis of my musical philosophy “Note2Self” that has grown out of Gateless. I am asking students to examine where literally the notes in the music started to not feel quite right to them. And then they make a mental note. It is a constant engaging of notes that are made of language, notes that are made of music, and the self. How does the self experience it? The physiological self with the body, and the heart self. It is all about the mind set: “I love this, because I love where this is taking me.”

Musicians often experience strong criticism in their education. Do you spread the word about your approach in the community?

I have a ton of students, but I don’t really have that much of a community of teachers. There is also quite a lot of competition among men and women in the music business. Often, men don’t like to talk about the way they teach. As for the students, every single one of them has a story of being discouraged. When I ask in my workshops: “Did anything happen in your past that led you to believe that you are not a musical person?”, every hand goes up.

In terms of Gateless, Suzanne talks a lot about the neurological effects of negative memories. What your soul perceives as attack can activate the “fight or flight” mode. “I am under attack from that comment my music teacher made to me when I was seven. So when I think about music, I get nervous.” That’s a neurological thing. You can’t help it. On the other hand, music naturally releases serotonine, dopamine, oxytocine – chemicals in the brain that promote happiness and relaxation, and ease of creativity.

Music is part of being human, it is part of evolutionary science. There is no culture without music, it is what creates community. It is a born impulse and the science around our brain chemistry backs that up. So if it is squashed at a young age, that’s a really big deal, because it is an essential part of being human. You don’t have to be good at it, but you shouldn’t live a life where you are ashamed of it or avoid it.

The professional level is a different culture. You are dealing with the culture at large, not just with your teacher, but what the culture expects from you as a performing or recording group. This is different for people who are at a more amateur level. I love the word “amateur” – it means “a person who loves”. So I am an amateur. I do it because I love it and for no other reason. I also teach that to people. They should proudly say “I am an amateur!”

What kind of music workshops do you offer?

I run destination retreats where people get together for two or three days, like the “annual women’s ukulele retreat” – a spiritual retreat center, filled with women and music. They enjoy being together with songbooks and sisters, in a place with all this female energy. In terms of instruction, I do basics on transposing, music theory combined with fun exercises. And pentatonica, which is an exploration of the sacred geometry of the pentatonic scale. I use that together with a crystal tone bowl to create a room full of people playing pentatonic notes that blend like magic against the stability of the note C. A crystal tone bowl is heavy and fragile and sounds kind of like a gong. When you run the stick around the rim, it is like playing a wine glass, but with a deep C. The C accompanies the most easily accessible pentatonic scale on the ukulele. That gives people a chance to improvise and flow with it.

When I first did pentatonica with them, it was absolutely amazing what happened! There were at least 20 women in the room. Everybody was playing different things at a different pace and in a different order, but it didn’t matter, it sounded as if you were in crystal heaven. It was beautiful. Everybody was mesmerized. And they were experiencing this profound success of making beautiful music without it being difficult. That was a huge challenge to the negative thoughts in their minds about their own musicality. It was really transformative.

What is your experience using the methodology in online lessons?

Online is going a lot better than I think it would. I am a diehard “I want to see you in person” kind of teacher. I resisted going virtual, but there is really no choice at this point. Also in our zoom sessions, we always build on the positive. I behave as though this is the kind of interaction I want us to have, and I am surprised and delighted to see how it unfolds in that way. When you behave Gatelessly as a leader, it brings that out in other people. And those are people from all over the world that have no connection with each other. We behave as people with a common love, as a community, that is why we are here.