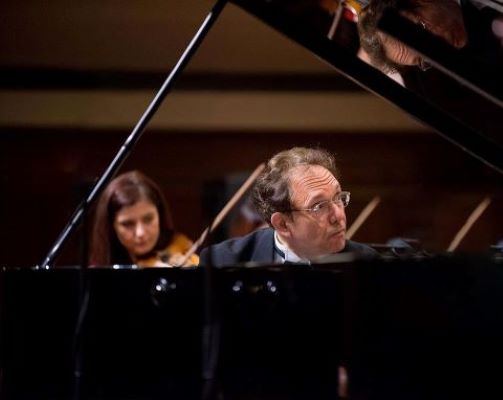 MUSEDU had the opportunity to speak to the concert pianist, teacher and researcher Paul-André Bempéchat who is Music Scholar at Cabot House, after having served for four years as Artist-in-Residence at Leverett House, Harvard University.

Please tell us a few words about your background.

I was born in Egypt and raised in Canada by French and Italian parents, which makes for quite a hybrid existence. At seventeen, I went to New York to study at the Manhattan School of Music with the fantastic chamber musician Artur Balsam, the pianist for the world’s greatest violinists and cellists, such as Yehudi Menuhin and Mstislav Rostropovich. We used to fight between the piano students about who would turn pages for him at the next Carnegie Hall concert. From there, I went to Juilliard for my Master’s degree. Then I went to Europe and studied literature at the Sorbonne and after my M. Phil. Degree, returned to North America and later to Europe to launch my pianistic career. My mother worked for a major airline which meant I could fly for free for auditions. While doing my doctorate in music history, I discovered the French impressionist Jean Cras, on whom I wrote my dissertation. My post-doc years were at Harvard, where I was able to enhance it for its eventual publication in 2009.

I must admit, I have never heard of Jean Cras.

No wonder! Back then, even professors at Harvard didn’t know about him. A wonderful composer and the only pupil of Henri Duparc. The songs and chamber music of the 1920s and his piano quintet – which is not played often – are marvellous. His string trio is a masterpiece. He also wrote a suite for piano 6 hands for his daughters, three little girls. These pieces are fun to play and not difficult. After a great deal of research and a 600-page book (Jean Cras, Polymath of Music and Letters), I have become the authority on him. Nowadays, he has become more popular. There are conferences on impressionism and his work to which I have been invited as guest speaker.

What made you decide to take up a career in music?

Myra Hess once said to a student who was torn between her career as a chemist and as a pianist: “Stick to your chemistry. You don’t take music up. Music takes you up”. There were a couple of times in my life when it was so hard that I thought of giving it up. The competition has never frightened me, nor has hard work. But there is a lot of injustice in the musical field. I had thought about becoming a lawyer to fight for justice. I even went to work in a law firm for a few months, as a paralegal translator, but I couldn’t take it. There is nothing more boring than translating a legal contract for a company trying to rent a space in a shopping center! There is of course an element of creativity in translation, but translating a contract is not like translating Goethe. So music does take you up. And she just doesn’t let go.

What do you do when you don’t play the piano?

I ride a bike – sometimes up to 40 kilometers a day, I go to the gym and I love to bake. When I am on holiday, the last thing I want do to is go near a piano. Sometimes I am invited for dinner at somebody’s home, and when I see a piano there I pray that no one will ask me to play. When they do, obviously you cannot say no.

How has the COVID-19 crisis impacted the way you work?

I streamed a concert of Beethoven’s late piano sonatas recently. Most of my live concerts for later this year have been rescheduled, the ones in Sweden are currently still on schedule. I give virtual masterclasses to advanced students and teachers at my wonderful Bechstein piano at home. I teach my summer courses, for example, on the history of film music or on the origins of Broadway musicals online, too. I will soon give a masterclass online and will stream it, if the students grant me permission. I don’t think that streaming will go away, even when the concert halls are fully open again.

What is your relationship with Vienna – apart from your excellent knowledge of German?

I performed at the Wiener Festwochen three times. I’ve always had this fascination with Vienna and central European history and have done research on the musical politics of the Habsburg empire. Then of course there is a connection with the major composers I perform – Mozart, Beethoven, Schubert and Haydn. Especially Beethoven. Beethoven is in my blood. Beethoven is always the one to come back to. Now that we have these difficult times across the globe, it is time to listen to what Beethoven has to say to us.

Could you describe in a few sentences what Beethoven has to say to us?

Beethoven started out as a poor man from a rustic environment and was an outcast in Viennese society. He was sad, lonely and often mocked. And then he transformed his inner life into that of a tremendously humble aristocrat. An aristocrat of the soul. This is what he developed in his late period, from which Schubert took off. He raises our spirits, brings us closer to ourselves, to the universe and the meaning of our lives. With Beethoven, this comes with such suffering and an immense love for humanity.

Do you think it is difficult for classical musicians to reach a younger audience?

Traditional concert halls often scare people. In Vienna, you have lovely places like Palais Palffy, which have been transformed into concert venues. Especially people from smaller cities may be intimidated to go to the Staatsoper and prefer the Volksoper or Theater an der Wien. I think younger people are coming back to classical music. They realize that health is important and that going to loud concerts all the time can impact on their hearing and brain cells. Children enjoy the creative process of making sounds together. Young people see that there is so much opportunity to make friends through music. You become closer playing piano or chamber music together. Interest in music will certainly also grow because of the technology and everything that is available online.

On social media, young musicians build bridges between circles that wouldn’t normally meet. People follow Igor Levit on Twitter for other topics, discover that he plays piano and find that really cool.

Levit is a wonderful artist and has a strong social conscience. I admire him for that. I have not become modernized enough in my approach to the “new world” to use an interactive website or Twitter, but I will look into that once I have fully emerged from the library after finishing my current book projects. Transforming an artist into a multidimensional person is a good idea. Artur Schnabel used to say that the concert hall was his temple, Rubinstein referred to it as his living room. Many great pianists nowadays are still piano only – you don’t hear of them doing things like biking, cooking or going to the gym, although at one point there was a knitting club for violinists!

MUSEDU brings amateur musicians of all levels and age groups together. Do you have any advice for hobby pianists?

I have so much admiration for people who do music at a semi-professional or amateur level. You enjoy in a way that professionals often cannot. But the underlying principles apply to everyone and are universal. As example, for the recording of my recent online recital, I prepared Beethoven’s opus 109. I had played the piece with incorrect fingerings when I was seventeen, so I had to relearn the entire sonata almost from scratch. That’s living hell, especially when you get older, as one must reconcile with past errors, interpretative and emotional miscalculations, even misreadings and probable bad fingerings. Back then I did not fully realize the spiritual enormity of this work. Relearning the fingerings was enough of a nightmare. But the unharnessed spiritual exaltations of a seventeen-year old had to be put aside to carve out an appropriate vision of Beethoven’s inner life. This is the ultimate responsibility of the professional. Non-professionals, even in concert, are permitted far more liberty, and often, this can be instructive for the professionals. Music is give-and-take, and the hard work is achieving the happy medium, but always in the composer’s favor.

What can you tell us about technique?

A good piano teacher must pay acute attention to developing right interpretations with correct fingerings generated by solid technical command. To teach and learn how to be as comfortable as possible, transferring weight from the shoulders to the arms and then to the fingers, and to use the most suitable fingerings for the individual hand. I am a big fan of the studies by Dohnányi. Get strong fingers and economize motion – then you can really enjoy what you are doing. Otherwise, it becomes very painful and can lead to tendinitis. When I was seventeen I was doing about two hours of Hanon exercises daily from the moment college began in September. I’ll never forget that day in October, when my left arm simply froze for about five minutes, and in mid-air! It was scary, but slowly, I lowered my arm to its natural position, and swore not to do more than 30 minutes daily! But as challenging as developing a good technique and artistic discipline are, the main thing for everyone – non-professional and professional alike – is to always remember the infinite joy and the hope, however temporary , we bring to people.

Virtual recitals will be streamed live from his living room on the website of the Newton Free Library on 27 August 2020 and from Memorial Church at Harvard on 16 December 2020. An online weekly music appreciation seminar centered around the piano repertoire and masterclasses are in preparation. Other engagements include concerts in Sweden in October, a tour in Portugal and a recital in Vienna in November – if the pandemic wanes. The second edition of his biography of Jean Cras will also be released this year.