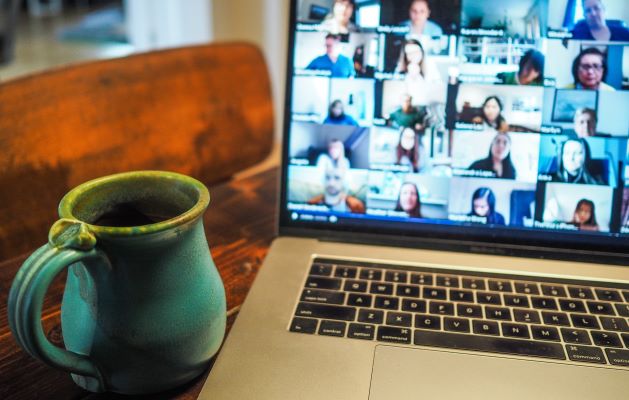 Meetup groups bring people together who share a common interest. At local piano meetups worldwide, people make music and meet fellow (amateur) pianists. In times of social distancing, some of these groups organise online activities. MUSEDU spoke to hosts based in Canada, the UK and the US about their experiences with this format.

Piano players in the UK are lucky to have Ben: He organises Let‘s Play the Piano meetups in nine different cities, namely Manchester, Liverpool, Birmingham, Newcastle, Glasgow, Cambridge, Norwich, Leeds and Sheffield. That´s hundreds of piano fans altogether. Each group meets once a month to play to a like-minded audience, and attracts pianists of all abilities and styles. Listeners and people who are considering to learn piano are also welcome. In real life, up to 50 participants – half playing, half listening – attend Ben‘s piano meetups.

For his monthly online events, Ben pairs up groups of two cities. “It‘s nice for everybody to hear and see the other group members”, he says. People can choose between playing live and sending in pre-recorded video or audio files which he will then stream during the event. “It is not the same as in real life, but another way of doing it. I will keep on with these online events in addition, even when we go back to normal”. He estimates that it may take a while until people regain the confidence to attend public events. To keep up engagement and involvement for everyone, Ben also organises a monthly Online Music Trivia Quiz. He is thinking about further ideas for his groups, such as streaming a concert from a live venue to a broader audience.

Prasa runs the Toronto Amateur Pianist Recital group which meets once a month. At his events, former competition winners and beginners play “Beethoven as well as music from Final Fantasy”. According to Prasa, “the benefit of a remote session is that there is less fatigue – if the recital goes on for a long time, people might get up and take a break, which is not possible during a live performance. It is also nice to see everyone’s home setups, and people tend to be less nervous. Of course, it’s also easier to take time out of your day when it’s remote.” Ghadeer‘s Amateur Classical Musicians Group is based in Montreal. The group meets every two weeks and has been created as “a place to draw and give inspiration, motivate each other, challenge misconceptions about the worth of learning an instrument in adulthood, and promote classical music”.

Both Ghadeer and Prasa have received positive feedback for their online events. Ghadeer‘s group members liked the social aspect and needed to connect in these difficult days. In addition, it helped them to stay motivated and maintain the momentum of practice. He assumes the novelty of the experience may have added to the excitement. The group even had a member joining from her home town in Germany. In addition to live events, Ghadeer is planning to keep the online format in the future and might adjust the time to accommodate international participants. Prasa‘s members also liked the fact that anyone could participate without being limited by geography.

Teresa from the Bay Area Amateur Pianists in San Francisco recently organised a virtual peer review session, helping pianists to “stay in shape” while playing from home. Five performers shared their sheet music in advance and received feedback from other participants during the session. According to Teresa “there was so much great discussion, I was surprised the fact it was virtual didn’t make it awkward.” Her group offers various events which attract different kinds of people, levels and styles. She keeps the peer review workshops small so they are engaging and intimate. Technically, the online event went well. Teresa did trial runs and zoom check-ins with her members early and made sure she covered all the technical set up concerns. She has also started to organise “virtual volunteer events” where virtual music is delivered to residents at senior homes who have not seen their families or had visitors in months.

“It’s interesting to see the performers playing piano at their homes”, says Tony. He is a member of piano meetup groups in the United States and Europe and already attended several virtual events. To him, performers looked more relaxed and comfortable at their own instruments and he enjoyed seeing part of their music life from their rooms.

Are there any downsides to online events? “Less of a community feel and interaction due to the lack of direct social contact”, says Prasa. This may be especially difficult with entirely new members. Ghadeer remarks that instead of playing duos or trios, online participants could only play one at a time. Some had technical difficulties. As most platforms are optimised for the human voice, the quality of too low or too high pitches deteriorates quickly. Tony also finds the audiovisual quality disappointing due to network issues. “Some performers don’t have enough expertise and experience of recording”, he says. He recommends that hosts provide technical advice to those who would like to play and monitor the zoom meeting room – which includes turning off the audio and video of participants centrally.

The Vienna Piano Meetup did not host any virtual get-togethers as an alternative during lockdown. But the virtual exchange with other groups worldwide has been valuable – and all of them welcome fellow pianists from other places at their online events. This is a huge advantage of virtual platforms, and quite the opposite of social distancing. Online meetups provide a new possibility to connect and make music with like-minded people, no matter where they live. A spirit we should remember to keep after the crisis!